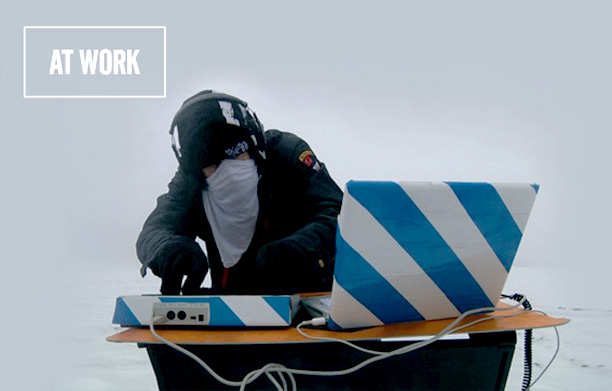 Artist's Biography
At Work has been at work since 2001, setting the surrounding landscape of his native New Jersey's congested sprawl and threatened Pine Barrens to instrumental electronic music.

2005 saw the first release on Batona, At Work's Build It Up, Break It Down, which was subsequently remixed by Alka, City Rain, Knife Jams, Dev79, Stumble, Sub-Arkt, Clocklife and At Work, and released as a 32-track remix album in 2010.

Following 4 music videos for Build It Up, Break It Down--Remix, a 1-track, 10-minute-long single and video appeared at the end of 2011, "10 Minute Break." 2012 started with the release of the sample-driven My Property, from which a video for "Her Heart" was also released. Keeping with the release's theme of appropriation, the video is a remix of Double's original videos for their single, "The Captain Of Her Heart." Spring 2012 revealed another At Work album years in the making: A Very Slow Collapse.

Statement
Amidst calamity, corporate supremacy and environmental & economic collapse, another struggle is at work: youth subculture seeks to part from the past and the mainstream by creating its own identity through media and dress code. As culture snitches, cool hunters and trend-seeking entrepreneurs ever seek the cutting edge of culture to dress up their ads and products in relevant sounds and looks, the innovators must be forever adjust and respond to the ground taken, driving further into reinvention. Indiscernible Structures as well as the incoming tweets respond to a possible future where a once obtuse music subculture is commodified and absorbed into mainstream comfort zones; where meaning is lost through the absorption of commerce, and left irrelevant in the onward march of time.