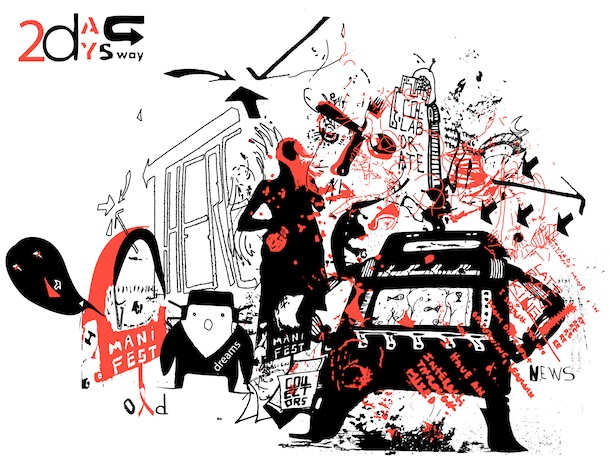 The work
Ds are a series of collaborative audiovisual projects between artists with different backgrounds, interests and locations brought together @Ds WAY

Neighbourhood Watch Childhood
A stop motion overlooking the neighborhood fall asleep in the rain, wake up to work and leave their childhood at home while their children play noise at the Tate. Visuals by Diana Matoso. Audio "Rain Generator" by MagicVan.

Ds WAY, A short way
A journey around the block of an animated landscape. A 5 minutes journey through a composition made of audiovisual life extracts and mixed realities willing to walk your imagination all the way. Diverse as daily life, this short explores several animation and editing techniques, bringing together experiences from all visual arts. There are many ways you can go, Ds Way is one. Seat back and enjoy the view. Visuals by Diana Matoso. Music by Steve Lee.

Short Hands
A hand full of everything and the other full of nothing is a short inspired in portuguese proverbs about hands, such as: "I rather have 1 bird in my hand than 2 flying", "I know this place as the palm of my hand" or, one of my favourites "You have hands of air and wind" [when you don't catch things]. Visuals by Diana Matoso and Music by Carlos Leiria, 2005.

Live Graffiti in Brick Lane
Filmed while riding around Brick Lane, 2007. There was some sort of event and some great street artists were painting. Video by Diana Matoso. Audio "The Streets" by MagicVan.

Our Streets!
What started as a few people following a bike sound system around Old Street ended with hundreds celebrating their right to the streets in a spontaneous party.

Shorts 2 Share
Ds visual explorations are a collection of soundless video loops created for live vj sets. They are a mix of shorts filmed while walking around, stop motion collaborations and motion graphics. Visuals by Diana Matoso. Footage by Diana Matoso and Rita Sarzedas. Performers: Barkosina and Jota.

Ds WAY
An online jam where a network of international creatives meet to collect, collaborate, share and reuse their creativity and know how. A platform for sharing, co-creating and give support to sustainable projects wherever and whenever they are located.

Diana Matoso A creative explorer, ARTivist and incessant visual collector either via photography, video or illustration. Ds work is a visual collage of both analogue and digital pieces, [re]crafted , [re]played, [re]mixed and [re]used but never quite the same. Webpage: http://www.dsway.co.uk/d
Rita Sarzedas An experienced Architect and traveler. Passionate about local sustainable projects and inspired by art, music, photography and video. Rita's free spirit [raised in Angola] is in everything she does, she believes in the human being and it's capability of becoming better by means of collaboration and sharing. Webpage: http://dsway.co.uk/2/rita-sarzedas
Barka A grain of dust from an eastern star who likes to touch the sun. Barka's country is the world and she constantly finds herself on stage one way or the other, while mutating into any and every thing. Webpage: http://dsway.co.uk/2/barkosina-hanusova
Jota After years of studying psychology and tourism Jota found out that communication is her real passion, networking and all the things that can be done from that. With a big conscience about the world and it's cohabitants Jota loves art as she thinks it's the best way to arrive to peoples heart and mind and improve herself and every human being. Her main goal is to make alternative and educative education arrive to everyone so people can choose the best way to follow their bliss. Webpage: http://dsway.co.uk/2/jota
Taren McCallan Moore [aka MagicVan] The eclectic art of Taren McCallan-Moore concerns itself with the crumbling residue of the everyday, formed together into allegories of hope, humour, madness and reclamation. Webpage: http://www.flickr.com/photos/tarenmccallan-moore/
Steve lee [aka The Project Club / Above Machine] In recent years, Steve has produced and released vinyl records on Is It Balearic?, Needwant, Tusk Wax and his own imprint Above Machine. These releases have been coupled with some lovely remixes from Ray Mang, Coyote, Lovefingers, Shrinkwrap, D-Pulse, Seahawks and Lexx. In addition, his edits make brief appearances in record stores and his production skills land on a few other pop stylings. Webpage: http://twitter.com/theprojectclub
Carlos Leiria A sound engineer and composer from Portugal. Currently living in Paris while working at LA Room Studio. Webpage: http://www.laroomstudio.com/