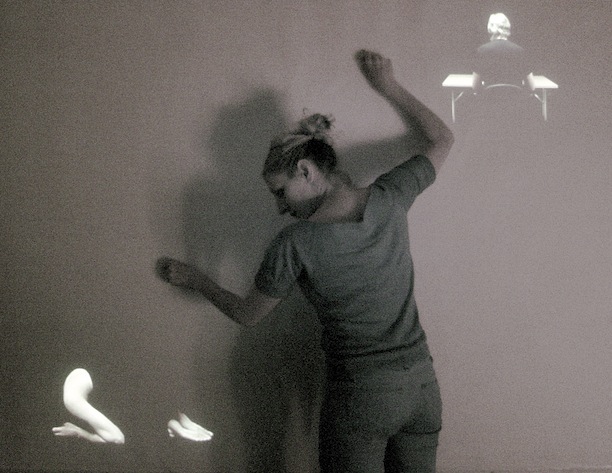 The work
In 2010 Fig. performed for the Late, Late Breakfast show with Tracey Moberly on Resonance FM. In contrast to their live visual performances, they used the sound of drawing implements, voice and live electronic sampling for a sonic improvisation. Zakiewicz then used the recordings as soundtracks to the animations.

The composition of the animations are mainly based on Zakiewicz's former teacher Chris Jennings' painting 'Parting from St. John (from the Last Days of the Virgin); after Duccio', from his series 'Homages to Renaissance Masters', in which Jennings breaks down the main visual elements of the Duccio. Jennings' main visual interest was the use of shallow space but he has often worked with musicians making works as graphical notation.

The breath, particularly the in-breath is often a feature of their work. The act of inhalation can be a sense of effort, perpetration or suspense and is the psychological equivalent of the up-beat in music. It can be a spontaneous gesture but is also a technique common to engastomyths (ventriloquists) and shamans.

Fig. began in 2008 with composer and vocalist Alwynne Pritchard, sound designer Thorolf Thuestad and visual artist Claire Zakiewicz.Fig. has performed at the Foundry, London in 2010, at PointB in New York in 2011, in The Courthouse, Bergen in 2011 and at Landmark, Bergen in 2011.

Alwynne Pritchard (voice and electronics) is a performer, composer and artistic director of the Borealis festival in Bergen, Norway. She studied at the Royal Academy of Music in London and has a PhD from the University of Bristol. Her compositions and performances have been heard across Europe, America and Indonesia and she has worked with a vast array of musicians and ensembles. Alwynne also performs with Myrtle, FAT BATTERY, unterPritperTingerchard and Ding Dong and is director of the movement/video oriented performance project STIFF.

Thorolf Thuestad (audio and video computing) is a musician, sound designer composer and technician with extensive experience from a wide range of projects in music, theater, dance productions, installation art, electronics and programming. Thorolf has developed various interactive systems for installations including work for the Holberg Museum in Bergen, Norway, and for Bjornar Habbestad's mobile phone art project Telart and has received commissions as a composer.

Claire Zakiewicz (live drawing and painting) is an artist working with drawing, sound, performance and moving image. She studied at Sir John Cass School of Art in London and has exhibited and performed across the UK and Norway in galleries, performance venues and on radio. Collaboration is an important part of her practice and she often works with composers, musicians and film-makers as well as other visual artists.