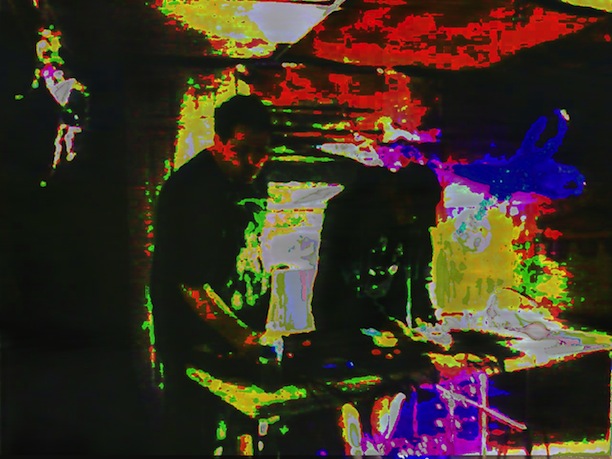 These five videos were made in June 2012 in preparation for two midwest US live performances by my electronic music act, Helium Ointment. In Michigan, the videos were displayed with a split signal off of a VCR onto a wall of old televisions. Later this year, they'll be packaged as an Audio/Visual release for naboamusic.com as Helium Ointment's album "Pure Acid Eats Tapes".

Artist's biography
Since 1990, Qixoni has been experimenting with electronic music as a part of a variety of groups and under different aliases--most notably as JMM or Justin Mathew Mooney. His musical projects include Helium Ointment, Deceptik, Bicoastal Disorder, Oh By The Way, among others. He has put out a split CD with Metropolis Records recording artist, Caustic; remixed Sergeant Sawtooth, a side project by Rob from Kevorkian Deathcycle; shared the stage with Enduser, Mentallo and The Fixer, and Captain Ahab; and has been regularly featured on WCBN in Ann Arbor, Michigan as well as WRSU in New Brunswick, New Jersey. During that time he has dabbled in creating visuals both to accompany his music, and as a separate medium; but only recently has he branched out from music to really focus on video work. This year, he has played in five states throughout the New York City area and Midwestern US, including participating in the 2012 Cut Party Tour with his electronic act, Helium Ointment, a duo between Qixoni and Paul Simpson (of WCBN's "The Answer Is In The Beat"). His style is reminiscent of 1990's work by H-Gun Laboratories, Emergency Broadcast Network, and Meat Beat Manifesto; and approaches the visuals in the same way you would cut up sound using a sampler. His exposure to arthouse theatres, film festivals, and independent film culture as a whole from a very early age has a heavy influence on his work as well, and he likens his approach to both music and video to that of William S. Burroughs and Brian Gyson's "cut up technique" for writing.