Artist's biography
If a picture tells a thousand words, Wigan's drawings are worth an entire library of professorial works on Pop Culture.Urban art pioneer, educator and writer Mark Wigan has been described as Britain's foremost Pop Artist by London Weekend Television he has been an illustrator and roving reporter for street style bible i-D Magazine, exhibited his paintings with Miles Davis and John Lennon in Japan and was commissioned by Andy Warhol to paint murals in New York in the 1980s.

Warhol described Wigan's four floor high mural at the Limelight Club in London's West End as HOT, recommending him to paint the New York Limelight Club and introducing him to Keith Haring and the New York downtown art, music and club scene of 1986.A prolific graphic artist Wigan's drawings and paintings have chronicled and celebrated club culture since the 1980s he is the ultimate night club artist as the Independent put it

Wigan is named after the Northern Soul Mecca in the Lancashire town of Wigan -home to the legendary Casino, big baggy trousers and some spectacular dancing.

Journalist Keith Watson wrote 'Looking at these pictures is like walking into a room with a ghetto blaster cranked up high'.

During the Summer of Love of 1988 his artwork was everywhere from acid house record sleeves for the likes of A Guy called Gerald and Frankie Bones, music video animations to T-Shirts,flyer designs and night-club murals in London ,Tokyo and New York seminal clubs including The Brain Club, P.Picasso and Gold.

When the going gets tough the tough make Graphic Art andWigan's black and white drawing chronicled the underground club and street culture during the Recession of the early 1980s Philip Hoare wrote 'Wigan observes Britain in Recession where an alternative economy of warehouse parties and market stalls provide work for the dispossessed. It's not all despondency, however, and the humour in Wigan's work comes through'.The Face magazine commented that Wigan's work revitalises more stoic forms of social realism with a neon bright parade of semi fictitious cult classics, snap, crackle and popping their way through the heated hordes of clubland.

Alix Sharkey writing in the Independent stated 'Some of the early works from the 1985 London Subterraneans series, for example are now revealed as astonishingly accurate maps,showing the development of the attitudes, hairstyles, clothing and interests that defined a subculture. If a picture tells a thousand words, Wigan's drawings are worth an entire library of professorial works on pop culture.

Wigan has led the BA (hons)Graphic Design course at The University of Salford and the BA and MA courses in Illustration at Camberwell College of Arts. He has been a full time Senior lecturer for the past 14 years and also worked as a freelance graphic designer and illustrator for sixteen years before that.

Computer Arts Projects recently described him as one of the worlds top 40 designers,

Since 2010 with partner artist /filmaker Kerry Baldry he has directed and curated the worlds first and only Museum of Club Culture in Hull East Yorkshire a museum dedicated to chronicling and celebrating club culture and streetstyle from around the world www.museumofclubculture.com

He also exhibits his work internationally and his paintings, prints, drawings and ceramics are held in international public and private collections including The Sala Goya at the Circulo des Bellas Artes in Madrid and Spiral Gallery Tokyo.

To date he has authored five books on contemporary Illustration featuring the work of hundreds of leading international illustrators and designers published by AVA Publishing and distributed by Thames and Hudson. 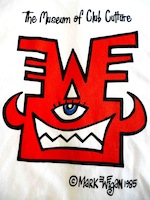