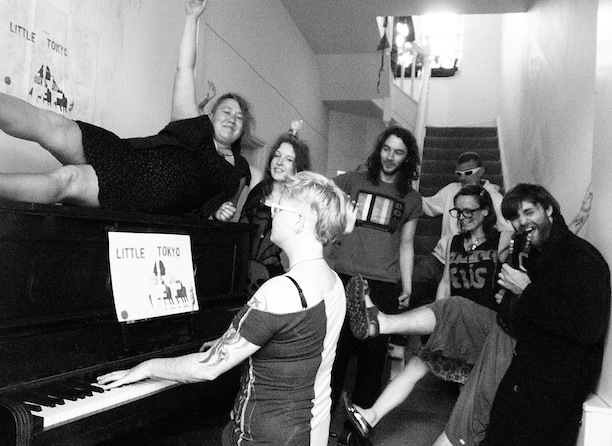 Little Tokyo
Little Tokyo, is a performance art video installation and 'happening' by the South Wales Arts collective WeR4Real They were formed in June 2012, by the residents and visitors to The Wells Hotel, Riverside, Cardiff. The Collective acts as a creative arts commune for those involved.

In 'Little Tokyo' The group create a world within the hotel with sound, light, sculpture, performance, ritual and word. A movement and happening, ever changing and growing according to the different interests of the individuals.

Elen mai wyn jones
http://elenmaiwynjones.com
Elen Mai Wyn Jones currently resides and works in Cardiff, Wales.Her education lies mainly in the arts, and She graduated in 2009 from a Fine Art degree from University of Wales, Newport. Elen is intrigued by the fine arts versus craft debate and somewhat unintentionally plays with this dialogue in her work to confuse this discourse further. She has found, and experienced herself, that this debate can at times be non-inclusive of other cultural and institutional art output. It is then placed into the 'box' of 'outsider' by the art world, which could be said to encourage voyeurism of the artists, rather than the art.

Elen works in a variety of media, but is mainly concerned with the use of textile and knitted art and converting it into installations. She balances the raw and sometimes sinister elements of her installation work, by using knit in a more conventional manner, sometimes making patterned objects and accessories.

Beth Greenhalgh
Born in Huddersfield, Beth Greenhalgh studied Time Based Practice at Cardiff School of Art and Design and graduated in 2006. As an emerging artist she has presented performances at Experimentica in Cardiff, EXPO festival in Nottingham and NRLA Glasgow. She has collaberated within Trace collective Cardiff, ProtoPLAY London/Estonia and now Wells Hotel collective Cardiff. Solo work includes, Insinuations: Trace Collective at the Switch Room, Belfast. My land, Staglinec, Croatia, Little Green the National Eisteddfod Wales and recently 'Dinner with a birch' tree and 'holly boy' Cardiff.. Her work utilizes highly aesthetic scenes to evoke uncanny rituals and images alluding to a mythical reality based on a distorted "popular culture".

Arran McKenna
Born in Toxteth Liverpool 1982 then in 1996 at the age of 13 moved to Bethesda , North Wales due to the volatile nature of the city at that time. He became interested in music and performing arts while studying at Parc Menai, Bangor. This led him to be involved with different bands and creative projects such asThe sound sluts Junk, Atavistic endeavors, Infant Crack Factory and to date in Cardiff, Little Eris.

Throughout this time he has also been involved in setting up Live music events and Festivals as a performer, Sound engineer and video technician.

Due to his extra curricula interests in politics, religion, history and comedy his projects are driven by the current and past affairs of the world that we live in. He attempts to high-light perceptions of our cultural and social realities, as portrayed to us , through the use of education, news, media and various other forms of propaganda . He wishes to evoke the audience to view these subjects with an eye to the playfully cynical and the ability to laugh or cry at the dark contemporary satire that is the global human culture

Fishy
http://soundcloud.com/hellofishy
Born in Aberdare and resided in Cwmaman up until June 2012, when he moved to Cardiff in search of working with more like minded individuals on art and music projects. Whilst in Aberdare, Fishy was in a number of bands and music collectives such as; Censorshit, Smut Puppets, Voodoo Soundwave and the S.O.S. band (Save Our Sheps) which was formed to succesfully stop the demolision of "The Sheperds Arms" a hub for musicians and creative minds alike, and also the last standing pub in the village of Cwmaman. Fishy also co-started Vegstock, an unofcal festival on the mountains of Cwmaman which has been running 6 years, with the intent of bringing the youth of the community together and working on something positive, which won the respect of the people of Cwmaman and has proved to be a true source of inspiration. Fishy now plays in the band "little eris" and produces electronic music.

Bronwen Davies
http://www.littleeris.blogspot.com
Bronwen began her innovative career by studying Entertainment Industry Management at Buckinghamshire Chilterns University , and simultaeneously working as promoter and sound engineer at the White Horse Music venue. After graduation, she moved to London to work in media production in the West End. During her time in the capital, she played bass in London band Your Highness who were signed to Org records. In 2004, Bronwen returned to Wales to take up the post as Arts Development Ofcer in the village of Cwmaman.Working within this capacity, she launched Environmental Film Festival Wales and ran a programme of music, cinema, theatre and arts events .She continued to support local underground music by running a monthly punk night called Scene Sick in Aberdare. She parrallelled this with her own music ventures, touring the UK with punk band Freaky Fortnight on bass and vocals, co-starting Vegstock, and launched the Save Our Shepherds campaign to save the village pub from demolition. In 2008, Bronwen moved to Cardiff to work full time on her Little Eris electronic music project.In the recent years she contributed to the local activist and cultural community by cofounding the Unemployed Daytime Disco and Documenting the great Tax invasion occupation through sound recordings and photography.

Melanie Perry
Mel is a writer and poet ,based in Caerphilly .She has contributed to various events around South Wales, most recently performing at the Unemployed Daytime Disco and now Little Tokyo.