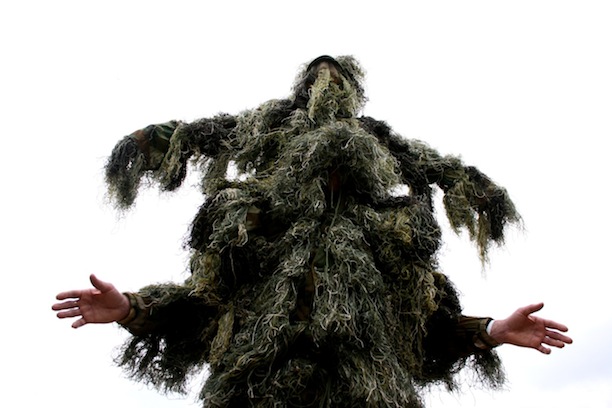 The work
From the Edwardian stylings of the 'fifties Teddy boys, through the fetish wear adoptions of punk to the 'men in sportswear' of the hipperty hopperty years, youth subcultures have plundered the wardrobes of other eras and functions. In 2010 good cop bad cop, men in their forties who had experienced the symbiotic generative relationship between clothing, music and sub-cultures, and who (perhaps wrongly - but we think not) regretted its passing in the digital age, discovered the ghillie suit. Inspired by youtube videos that showed, with varying, and inevitably failing attempts to promote the virtual 'invisibility' of the outfit, they set about re-locating this functional clothing.

In 2011 they made three short films, "moving the goalposts", "performance to be viewed by passing vehicles" and "curating litter" that introduced "Y Dyn Hir" (The Long Man) to their work. These works located the figure in non-confrontational relation to the landscape - to be seen in passing rather than looked at - undertaking unexplained tasks.

In 2012 they were invited to contribute work to the Special Exhibition of the Eisteddfod Genedlaethol Cymru, the National Eisteddfod of Wales. They filmed at 10 locations in the Vale of Glamorgan, at sites of "historical significance" - from the site of the world's first radio transmission, the scrapyard for the UK's decommissioned steam engines, ancient burial sites, villages lost to the black death etc. And here they did nothing, appearing as bit part players, as set dressing, or not at all, in the contemporary banality of these 'significant' landscapes.

During the filming of these works they became aware of Charles Freger's "Wilder Mann" project, which revealed that what they were engaged in bore uncanny visual similarities with 'wild man' activities world-wide. Without knowing it they had joined a sub-culture unbounded by geography or time-scale, the exploration has just begun.

good cop bad cop is the collaborative partnership of John Rowley and Richard Huw Morgan. Since 1990 they have collaborated on a variety of art projects, mainly live performance, but also including installation, film, television, sound-art, visual art and, for the last year a weekly arts programme for Radio Cardiff. Both Rowley and Morgan have been recipients of the Arts Council of Wales prestigious Creative Wales Award. They have been financially, and logistically, supported by the British Council, Wales Arts International, ACW, National Theatre Wales, but mainly from their own pockets.